Kuan Yin is the name for the Bodhisattva Avalokitesvara, bodhisattva translating to mean; bodhi-wisdom & sattva- being in Sanskrit. She is one of the most universally beloved of deities in the Buddhist tradition, Her name is short for Kuan Shih Yin (Guan Shi Yin) which means “Observing the Sounds of the World”. As the Bodhisattva of Compassion, She hears the cries of all beings.

Also known as Quan Yin, Quan’Am (Vietnam), Kannon (Japan), and Kanin (Bali), She is the embodiment of compassionate loving kindness. Kuan Yin enjoys a strong resonance with the Christian Mary, the Mother of Jesus, and the Tibetan goddess Tara. By Chinese Taoists She is reverend as an Immortal.

In the Chiense patheon Kuan Yin, masculine in appearance, along with Buddhism, first appeared in China as early as the 1st century CE, and reached Japan by way of Korea soon after Buddhism was first introduced into the country from the mid-7th century. Images which later displayed attributes of both genders appeared as Kuan Yin began assuming any form required to relieve suffering. As Her association with compassion and kindness grew in China She became interpreted in an all female form around the 12th century. A Mother-Goddess, a Patron of Mothers and Seamen, She gave hope to the people who worshiped Her.

In the modern times we see Kuan Yin as a beautiful, white-robed woman wearing necklaces of royalty. In many images She is depicted carrying the pearls of illumination granted from the creatures of Mothers sea. In her right hand she may hold a water jar containing the waters of life or may be pouring the healing waters from a vase. With this water devotees and all living things are blessed with physical and spiritual peace. In Her left hand she holds a willow branch, a sheaf of ripe rice or a bowl of rice seed as a metaphor for fertility and sustenance. Her crown usually depicts the image of Amitabha Buddha, her spiritual teacher before she became a Bodhisattva.

Sometimes Kuan Yin is represented as a many armed figure, with each hand either containing a different cosmic symbol or expressing a specific ritual position or mudra. This characterizes the Goddess as the source and sustenance of all things. Her cupped hands often form the Yoni Mudra, symbolizing the womb as the door for entry to this world through the universal female principle.

There are numerous legends and myths of Quan Yin’s mercy as She answers all who call to Her. As a true Enlightened One it is Her choice and vow to remain in the earthly realms and not enter the heavenly worlds until all other living things have completed their own enlightenment and thus become liberated from the pain-filled cycle of birth, death, and rebirth. Detached and free from the pride or vengefulness that fill the social conscious chakras of the earthly realms our Goddess of mercy remains reluctant to punish even those to whom a severe lesson might be appropriate. It is said that, even for one kneeling beneath the executioner’s sword already raised to strike, a single heartfelt cry to Bodhisattva Quan Yin will cause the blade to fall shattered to the ground.

In one myth Kuan Yin is the daughter of a cruel father who wanted her to marry a wealthy man she did not love. She begged and pleaded with Her father to allow Her instead to enter a temple and dedicate her life to the faiths of the people by serving the monks. Her father allowed this but had secretly conspired with the monks to make life so hard in the temple She would quickly become discouraged. The monks forced Kuan Yin to work all day and all night, while others slept, in order to finish her work. In Quan Yins mercy She forgave the monks and set about Her chores as best as She could. Her compassion caught the attention of all the animals and they quickly aided Her in Her chores. Quan Yin found joy in Her sanctuary.

Her father, seeing this, became so frustrated that he attempted to burn down the temple. Kuan Yin put out the fire with her bare hands and suffered no burns. Her father strucked with fear ordered her to be put to death. Upon Her death she was made into a Goddess for all of her kindness and was granted a place in heaven. Quan Yin could not drown out the voices of the suffering in heaven and pleaded to be able to return to Earth where She could aid those who cried out. Quan Yin’s plea was granted and to Earth She returned where She vowed to stay until all suffering had ended.

Another version of this legend tells of a beautiful white tiger taking Kuan Yin at Her death to one of the more hell-like realms of the dead. In Her mercy Quan yin played beautiful music to soothe the demons and turned their Hell into a paradise. Visualizing Where Your Spell’s Energy Will Go

Although there is often much talk about remaining positive when it comes to either casting a spell yourself or having... read more Halloween paint shall be placed on the altar. All shall gather outside of Circle and share the tales of Samhain. ... read more 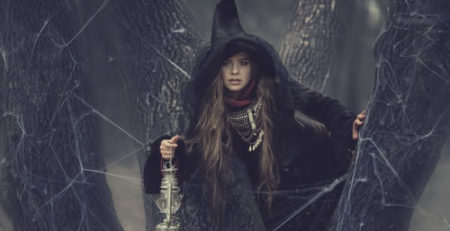 We remember our dead; our loved ones gone to the Summerlands before us We honor our sisters of the Burning... read more I am Erzulie. Originally I was the Goddess Oshun, the Yoruban river goddess. My origins are deeply rooted in the... read more